Here’s a really sweet tiny basket that is perfect for a small Easter gathering of young children.
It only carries about 4-5 little chocolate eggs or yoghurt covered sultanas,
so it helps to limit or contain that kind of strange hysteria that can sometimes overcome children when they know the Easter egg hunt will soon begin.
(What is that?  I’ve seen it happen even when they are hunting for hard-boiled eggs!)
Or you might use the origami paper basket to carry a tiny posy of flowers, or lavendar buds.
It might be a nice way of sending home a ‘lolly’ bag from a party too.
Origami Paper Mini Easter Baskets 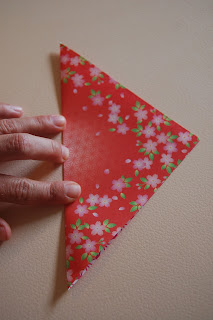 Fold a piece of origami paper in half on the diagonal. I used double sided paper with a complimentary pattern on either side.
(You can use any size piece so long as it is square. Mine is 15cm square and makes the basket about 7cm in height and 5cm across the base.) 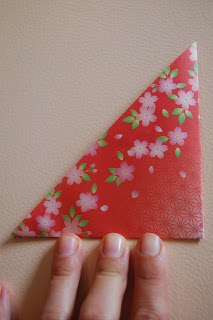 Swivel the paper 90 degrees and fold the triangle in half again. 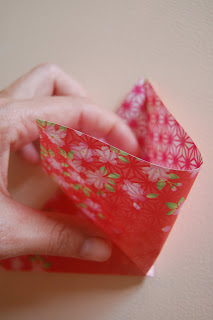 Put your finger into the first triangle to open it out, 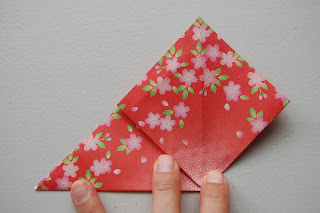 then fold the left tip to the top to make a square. 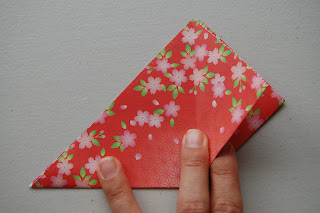 Flip the left side of the square over the the right, 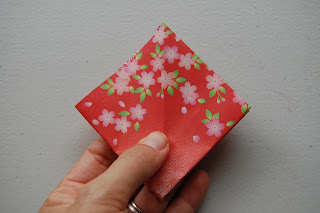 then repeat the step above to make a second square. 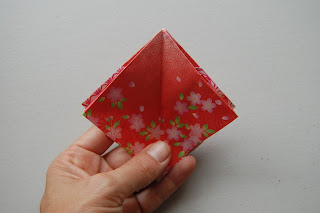 Flip the right hand side of the triangle back to the left.
This will leave you with two flaps on either side of the square. 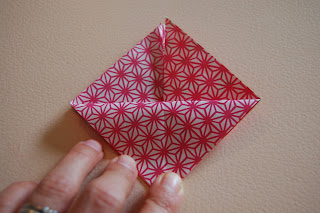 Fold the tip of the square downwards. 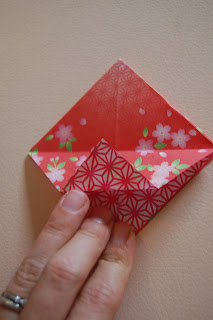 Then fold the tip of the paper back up to the centre crease and make a fold.
Then flip this tiny triangle backwards on itself and tuck it under the paper. 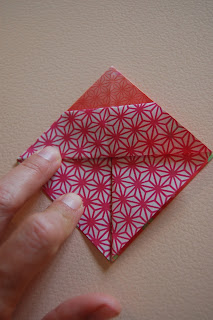 Now, swivel the piece 180 degrees so the open triangles face downwards.
Do the same on the opposing side of the origami shape. 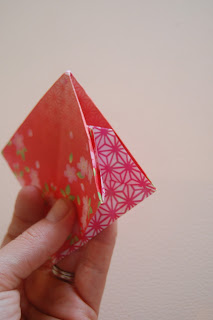 Put your fingers into the pockets of paper on both left and right side.
Push these forward and backward so that you now have a plain patterned square (no folds) on the outer sides again. 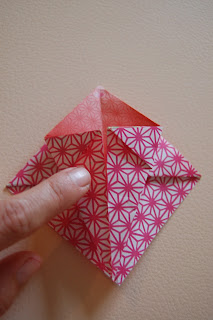 **Fold in the two sides of paper to form a kite shape like this.
The top line of this fold needs to be horizontal.
Make sure you have a good crease along the diagonal line. 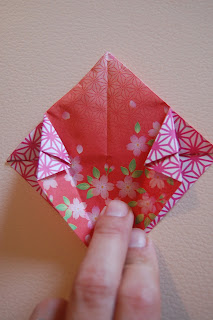 Open out these folds again.
Now fold the top tip of the corner back onto that diagonal fold line you just made. Repeat on other side. 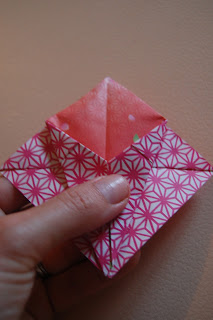 Now, refold the triangle sides (with tips remaining tucked in) along the original diagonal fold line from two steps above.
Repeat the steps from ** on the other side of the paper. 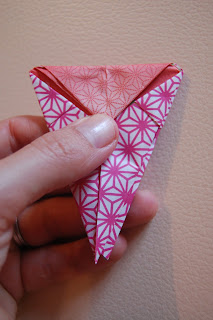 Fold the top tip down and make a crease.
Flip and fold it back the other way as well.
Swivel it 180 degrees so tip of triangle points to the sky.
(The tip is the handle) 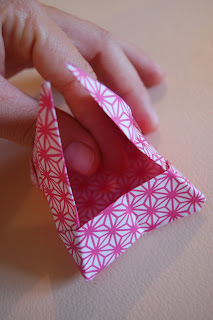 Push open the base by pressing your fingers into the base of the triangle.
The base should sit flat on the ground. 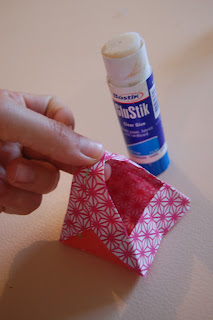 Use strong glue to stick one tip to the other to make the handle.
Let it dry. 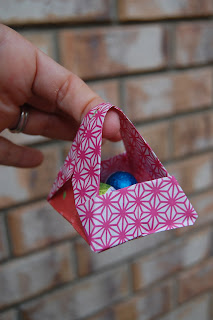 Fill it with your Easter or party treasures.
Happy treasure hunting!